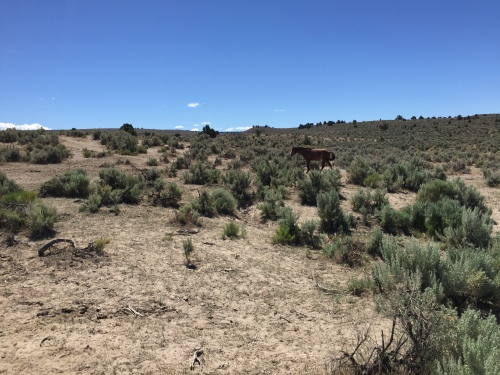 Wild horses and burros are a staple of the American West, an ideal so revered that even Congress in the Wild Free-Roaming Horses and Burros Act of 1971 described the animals as “living symbols of the historic and pioneer spirit.”

Now, nearly 50 years later, there are 81,951 wild horses and burros roaming over public lands, according to the Bureau of Land Management’s program data. That is a five-fold increase since Congress passed its preservation act. Populations have increased so much that the herds are taxing the ability of public lands to sustain them. There are 4,371 wild horses and burros in Oregon’s roaming herd — 76% more than the maximum appropriate management level (AML) for the land.

Just how to control that population is a growing source of contention between wildlife managers and wild horse advocates. Those disputes inevitably find their way into federal court.

For years, BLM tried to control the wild horse population by preventing pregnancy or slowing down population rates.

While there has been progress with birth control vaccines and adopting out horses, Oregon’s BLM office wanted to study “something different” that the agency isn’t using, Thissel said.

It proposed the Spay on the Range Behavioral Outcomes Assessment. Under the experiment, females would be sterilized using a procedure known as an ovariectomy via colpotomy — the vaginal removal of the ovaries. The United States Geological Survey would follow up to evaluate the procedure’s impact on mare and band behavior.

BLM had gathered more than 800 horses in Burns from the Warm Springs herd management area in October, with plans to return about 200 to range after half the females had their ovaries removed.

The procedure set off warning bells for wild horse advocate Ginger Kathrens, executive director of The Cloud Foundation. Her organization — as well as the American Wild Horse Campaign and Animal Welfare Institute — filed three complaints with the district court and three appeals to the Interior Board of Land Appeals.

Kathrens, who had toured the Burn’s facility in her role as the humane advisor for the National Wild Horse and Burro Advisory Board, said she knew for such a “complicated and dangerous procedure to be conducted (the facility) was unsuitable.” She added that it is rare for horses to have an ovariectomy via colpotomy because it was life threatening.

“It is extremely expensive and risky, and most people wouldn’t entertain it, let alone in the corral without supervision of top drawer surgeons,” Kathrens said.

The BLM describes the procedure in less dire terms. It says the century-old procedure is less invasive than the typical abdominal surgery used in spaying and has a 2% mortality rate in wild mares.

But Kathrens says the dangers go beyond the produce. The sterile females can still release hormones that show signs of heat to stallions.

“I think most of us, particularly the female sex, can see how terribly dangerous, inappropriate and lethal that is,” she said.

A federal preliminary injunction issued on Nov. 2 halted the experiment until case can be heard and a decision made.

According to the plaintiffs, the judge agreed that their free speech rights would be violated if BLM excluded them from watching the sterilization procedures.

The judge also found it was “arbitrary and capricious” for BLM not to study the social acceptability of the experiment, as planned during an earlier study, the plaintiffs said.

No Further court dates have been set.

What are the options?

With the spaying portion of the project on hold, Thissel said the BLM is evaluating its options.

In the past, BLM has tried to partner with universities to design new or refine existing fertility control techniques.

In 2014, Oregon State University was awarded a grant to pursue research, but Steve Clark, vice president of University Relations and Marketing, said that the involvement with BLM didn’t advance after the public comment period.

Colorado State University, which was involved in another Warm Springs sterilization project, also pulled out during the public comment period.

CSU, which has been investigating alternative population and birth control measures for wild animals for more than 25 years, said that while they withdrew from that particular effort, the concern of overpopulation is a “critical animal welfare issue that must be solved through objective, collaborative and transparent research.”

There are two versions available that can be administered through ground darting or injection, and it can block pregnancy for 22 months. She said it’s really effective for smaller herds that are known and tracked.

“With a herd like Warm Springs, get volunteers to do it so horses get used to them. Bait-trap with food and dart them in the trap or if they become habituated they can dart,” she said. “You have to do record keeping, but there are already volunteer groups who do this. It’s proven to work, but proven not to hurt the animal and it is reversible.”

Although BLM uses PZP already and Thissel agreed for smaller areas, a volunteer group would work, one of the hurdles BLM faces is majority of the herd management areas (HMA) are up to half a million acres. There are 177 HMAs on 26.9 million acres managed by BLM, according to BLM’s program data.

Thissel said there’s limited access to the range in late winter and early spring when the vaccine should be applied, and some of the horses aren’t approachable for darting, which makes delivery infeasible.

Thissel said that while there are longer lasting fertility control forms, they haven’t been shown to be effective and they need to be hand injected, which would require more horse gatherings and more applications.

“And that’s economically unfeasible,” she said.

Another method BLM has utilized to manage population has been adopting out horses to the general public; however, in the past 15 years, the market for horses has decreased significantly, Thissel said.

“In the ’90s where there weren’t many available, now we have thousands and thousands over what was once available,” she explained. “We have a lot of animals in holding. It’s compounded to the point where adoption probably can’t reach the demand for what we have available.”

Kathren said one of the best ways to manage population would be encouraging an ecosystem of predator-prey balance. She said there needs to be predator protection of wolves and mountain lions because without them there isn’t a natural balance.

“Personally, and I’m a wildlife lover, I don’t think wild horses should have any greater value than deer or elk,” she said. “We need to embrace the natural world and natural cycle; those top-tier predators need to have space on public lands.”

At the end of the day, the matter of overpopulation still stands. BLM says the wild horse population can increase 20 percent a year, doubling every four to five years.

“We’re really exceeding what is healthy for the landscape and animals both,” she said. “We’re way, way over the number of animals the landscape can support. An excess of any animal is going to cause undo pressure on limited resources; we have to look at the big picture.”